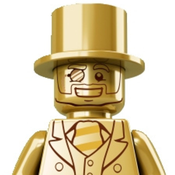 LegoTastic2 presents 'Architecture: Pont du Gard!'
This model captures the unique architecture of Pont du Gard, an aqueduct and bridge built in the first century AD, that spans the Gardon, a river in southern France. My model contains the two sides of the gorge that the bridge spans, the Gardon, and the iconic three layers of arches that make up the bridge. I tried to capture Pont du Gard's magnificent setting and structure in this microbuild, which also includes two minifigures to show how long this aqueduct has been around for. The two minifigures are an ancient Roman soldier and a tourist with a selfie stick to show how the people visiting Pont du Gard have changed since it was originally built.
I built this set because I really like LEGO architecture sets, France, and Roman architecture. This LEGO architecture version of Pont du Gard checks all of those boxes. I have also always wished to visit this landmark and the many other interesting sights in Southern France which was another reason that I created this build.
I think that this would make a great LEGO set because it would allow people to bring a bit of Roman history  into their own homes. The model would also be a great display piece that history buffs, or anyone familiar with Pont du Gard, could display at work or at home.
This build consists of 197 pieces.