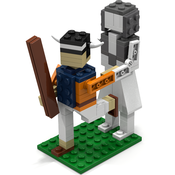 By billsmugs
0 comments
[UPDATE: Scroll to the bottom of the description for miniland-scale figures of Ico, Yorda and an enemy from the game.]

This idea is for sets based on the videogames of Sony Computer Entertainment Japan's "Team Ico" who created the PS2 games "Ico" and "Shadow of the Colossus" and are developing "The Last Guardian" for PS3. The sets shown here are just quick mock-ups to show how Ico could be made into a couple of sets. The images are not of any particular areas in the game, rather they are designed in the style of the game's environments; if this project gets enough supporters, it would be up to The LEGO Group whether to make set(s) based on recognisable puzzles in the game itself or to take the route I've done and work "in the style of" the game. Post in the comments which you'd prefer to help them out!

I've named this project "Team Ico sets" as Shadow of the Colossus ideas could also be produced, however the scale of most of the Colossi makes them harder to realistically design as purchasable sets, hence why I've gone for Ico pictures for the time being. Just as a final note, the minifigures in the images are just general representations of the figures, hence the lack of faces etc!

The main image features a basic idea, where Ico must climb the chain and push down a crate to allow Yorda to climb up after him, as well as featuring a shadow enemy to defeat. The image below features a larger environment, where Ico must destroy the damaged pillar with a bomb, allowing him to climb up, jump across and cut the ropes holding the bridge up. Yorda can then open the sliding door where a fight awaits. 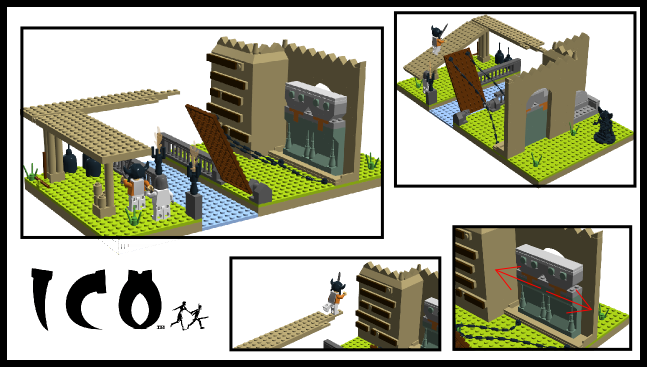 The image below shows some minland scale figures from Ico. These could make a cheap display set (132 pieces for the standing Ico, Yorda and enemy set) to complement the more traditional minifig-scale products. 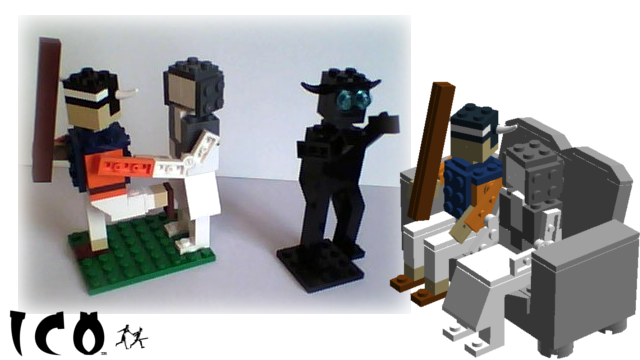