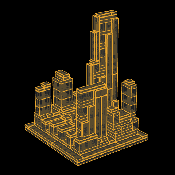 Halloween has always been my favourite time ! Lights, pumpkin, candies, lots of kids going from one house to another, all dressed in magnificient costums, and halloween parties !!!
Being also a huge fan of Lego, I decided to do it in my own way, by making a kind of Architecture Skyline based on the most common frightening places, to get a little bit of a Halloween feeling anywhere, at anytime !
Will you dare to open the book to read a few tales ?
What does it contains ?
This skyline is composed of 3 parts, each based on the more obvious places to remind horror movies/halloween places. Each parts contains some microscale figurine, to make sure you'll be able to play with this set just as with real minifig-scale sets !
The main part is designed as a skyline, with the overall look set to make it feel like an open book, telling spooky stories about Halloween, containing a witches wood, a frightening cemetery and a haunted house. It also contains 9 nano-statuettes (2 classical statuette, 5 dark wizards, 1 transparent ghost and a custom micro skeletton !), for a total of 480 parts :
The two add-ons are also based on some of the most famous monster. You first will find a Indigenous village next to a cave, where the people living there seems to have captured dangerous creature, even if the werewolf is still here hidden in the cave ! Will you help them to escape these evil animals ?
The second add-on is designed as a creepy amusement park. And what more creepy than a bad clown ?
Now it's your time to play, think, and tell stories with these little places. I dare you to !
Why making it an official build ?
Microscale is one of the most appreciated theme in the AFOL, and I really think this set can give fun to a lot of us. Moreover, the idea with this build is to launch a new line of product that Lego can give for every particular moment in the year (Christmas, St-Valentin, Carnival, St-Patrick, ...). Each tradition in the world can be adapted in a microscale build, that could be launch as a standalone product, a gift from Lego website, or a promotionnal event.
The inclusion of playable micro-monster is also a huge interest of this set, making it totally playable. You'll be able to use it as a decorative display, as well as any skyline, but also to make story with it.
So, why not ? Now, it's up to you to make it real !!!