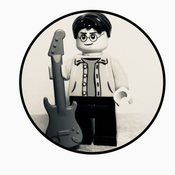 Five bandits have been found by a royal army and are being chased down. In a moment of desperation, they have taken and fortified an abandon fortress.

The fortess is built up in a corner of rock, and dug into the mountain nearby. It can be opened from the back for play features, but also contains elements (such as a firey arrow) to create the first offical Lego battle diorama set. There is also a hand-held battering ram and a battering ram on a cart, and the entire battle is built on a frame, so it has a detailed ground beneath. The flag is brick built (like in my Globe Theater project.) Contains around 1200 pieces, and has 10 minifigures and a horse.