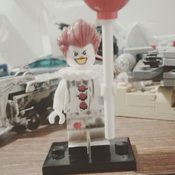 Mining truck (to scale) based on the Liebherr model T282C, it is a white truck according to the original model with functional motor and remote control, it can also be considered as a UCS. I built it because I had long dreamed about the idea of having a big truck for the minifigures, as well as other inspirations I had taken from other places; I started to investigate and ended up finding the Liebherr T828C, the largest mining truck built. From that moment I decided to start building with their application, it was hard work but in the end I got it.

I think it is a good Idea Lego because there are people who are interested in the world of machinery, more specifically in the mining sector since the cars that are used there are not conventional and are worth millions, while this is a smaller product , cheap and reachable for all public that, for my part, would be willing to buy, in addition they can understand the operation of  Lego engines with this product.