Mr. Bean on a Vintage TV 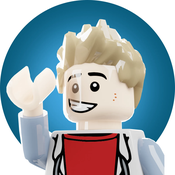 This model represents two of the most iconic Mr. Bean scenes
The two scenes are placed in a vintage TV.
The first scene is the christmas dinner with his girlfriend. Mr. Bean is stuck in the christmas turkey because he was searching his clock in it :)
The scene is happening in his kitchen. I tried to rebuilt Mr. Bean's kitchen with some details that it looks realistic with his original kitchen in the film.
The second scene that I have rebuilt is the ride with his legendary green Mini and an armchair on it, which he bought at the department store.
How to change the scene?
It's very simple. You just have to open the lip and the backside of the television. Now you can change the scene. :)
About the TV
Mr. Bean is popular since a very long time. That's why I decided to build the TV in an old vintage
style. On the right side of the TV are 3 knock controls and under these is a big speaker. On the top of the television there is an antenna so the TV connection remains stable ;)
I've also installed two original Lego lights by the Power Functions series that the scenes are well lighted.
I hope you enjoy my project. It would mean a lot to me if you would support my project.
Let's bring Mr. Bean on the Lego shelves.