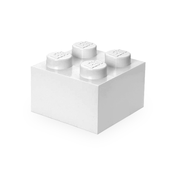 By Jimmi-DK
48 comments
The NASA AD-1 is one of the most unusual aircraft. During flight it successfully rotated its wing to 60 degrees. It was part of a flight test program by NASA from 1979 to 1982. Studies showed that the oblique wing would reduce air resistance which gave the aircraft higher speed and better range. The aircraft can now be seen at the Hiller Aviation Museum in California.
This LEGO model of the NASA AD-1 has an oblique wing that can turn like on the real airplane. It has details like stripes on the sides and the NASA worm logo on its vertical stabilizer. The cockpit opens and it comes with a minifigure test pilot.
Number of pieces: 363
Size:
Length: 416 mm (16.38 in)
Width: 384 mm (15.12 in)
Height: 96 mm (3.78 in)