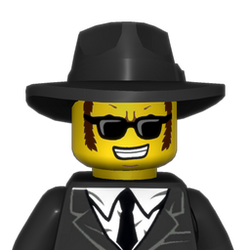 The LEGO Brickheadz line just recently hit shelves, and seem to have gotten some pretty god reception. I was quite excited by this idea, but one thing that surprised me was that there were no Star Wars figures. I want this to change, with the new Boba Fett Brickheadz figure.

While maybe not the most popular Star Wars character, Boba Fett would be a good start and translates well into this style. One problem I had when building this model was the jetpack. Even in the final model, it doesn't leave enough room for a tile piece on the back of the helmet. There also wasn't enough room for the cape piece, but perhaps I can find a way to fix these flaws in the near future. In the meantime, support this project! Being my first project, your support would mean a lot. And who wouldn't want a Boba Fett Brickhead?