UPDATE: I will be doing some fresh graphics for this one to make it totally clear that it is a full set... And conveniently, that also lets me put the brakes on this set a bit, so that "The Odyssey Begins" can go ahead faster, right behind Rome... After that, my strategic re-organization will be complete!

The Odyssey set also has two Spartans in it, plus a ton of other cool unique stuff, so please vote for the Odyssey set to help speed it up, Thanks! =D


"Today, one thousand nations descend upon you, Leonidas of Sparta! Are you ready?"

In a remote and narrow pass on the craggy coast of Northern Greece, the Spartans and the Persians are both staging unbelievably massive forces to crush each other... But soon they must heed the call to join together and face an even greater threat together as one! Can the gods of Olympus convince the bitter rivals to focus their combined powers against the chaotic and destructive rage of the Titans, instead of destroying each other? 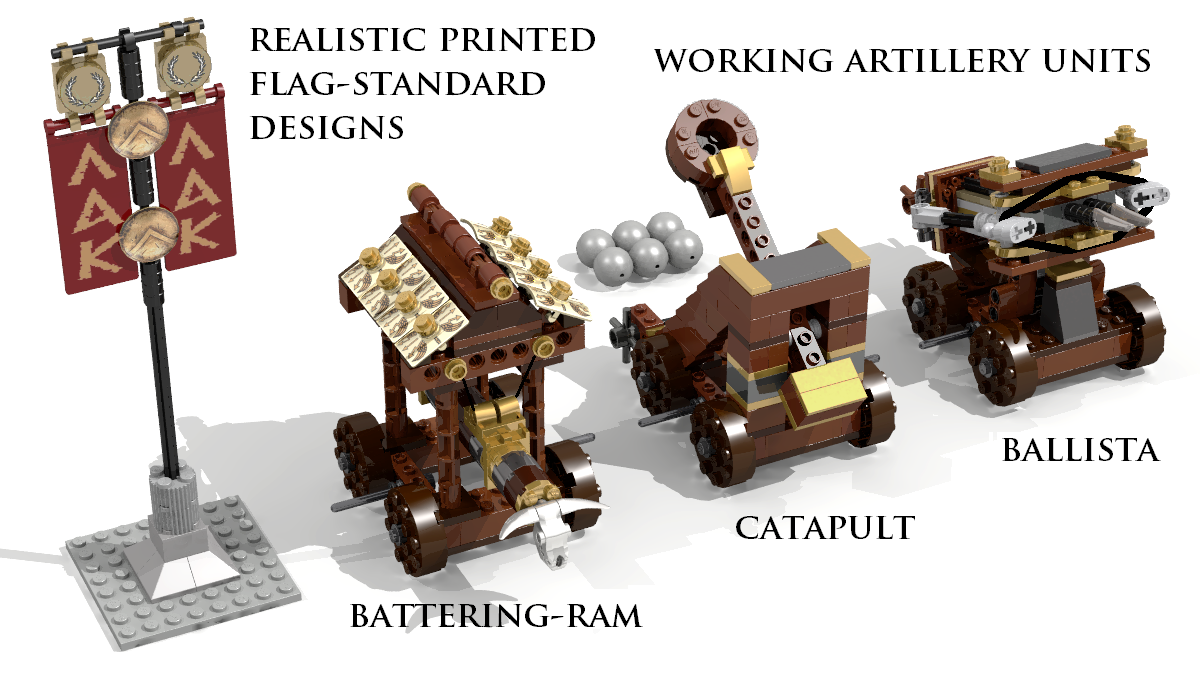 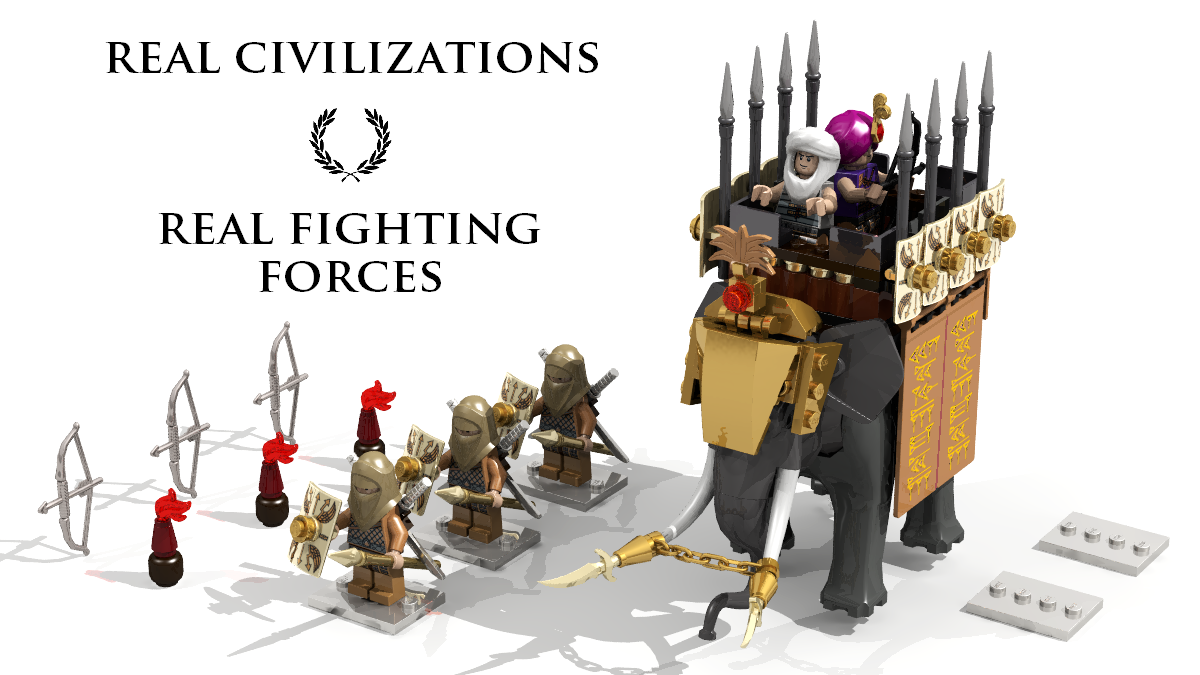 The Immortals are Xerxes's elite Royal Guards. Their naptha-grenades are 100% accurate. 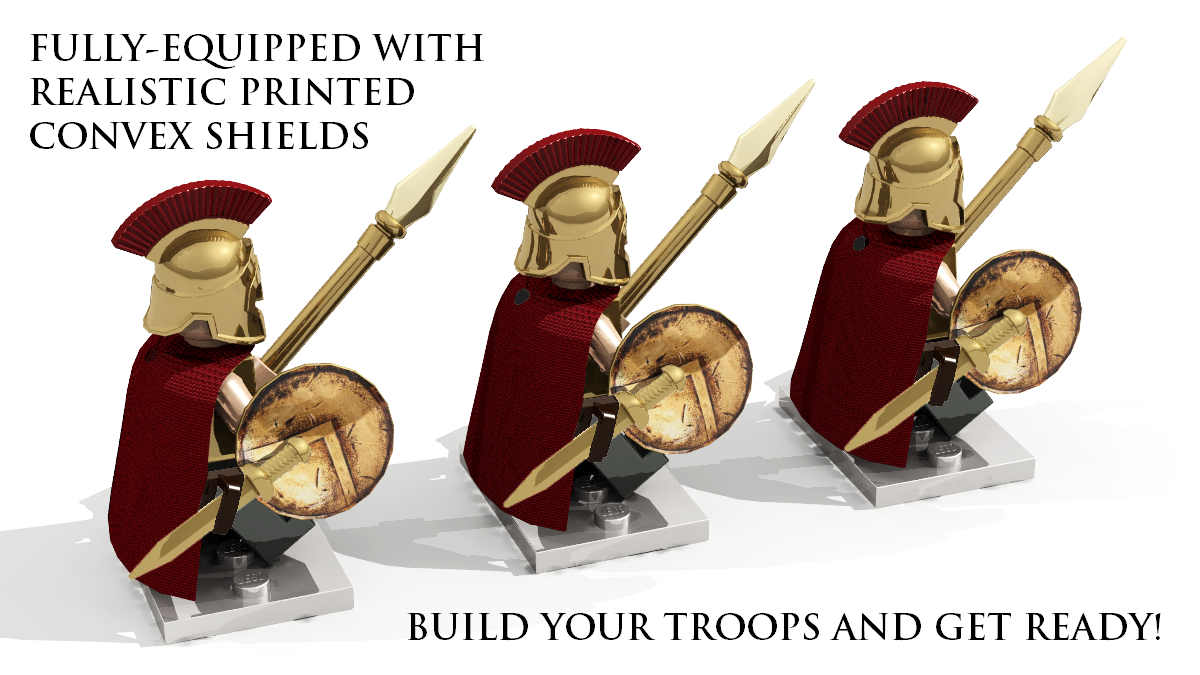 The Spartans come complete with printed hoplon shields and phalanx spears, plus swords. 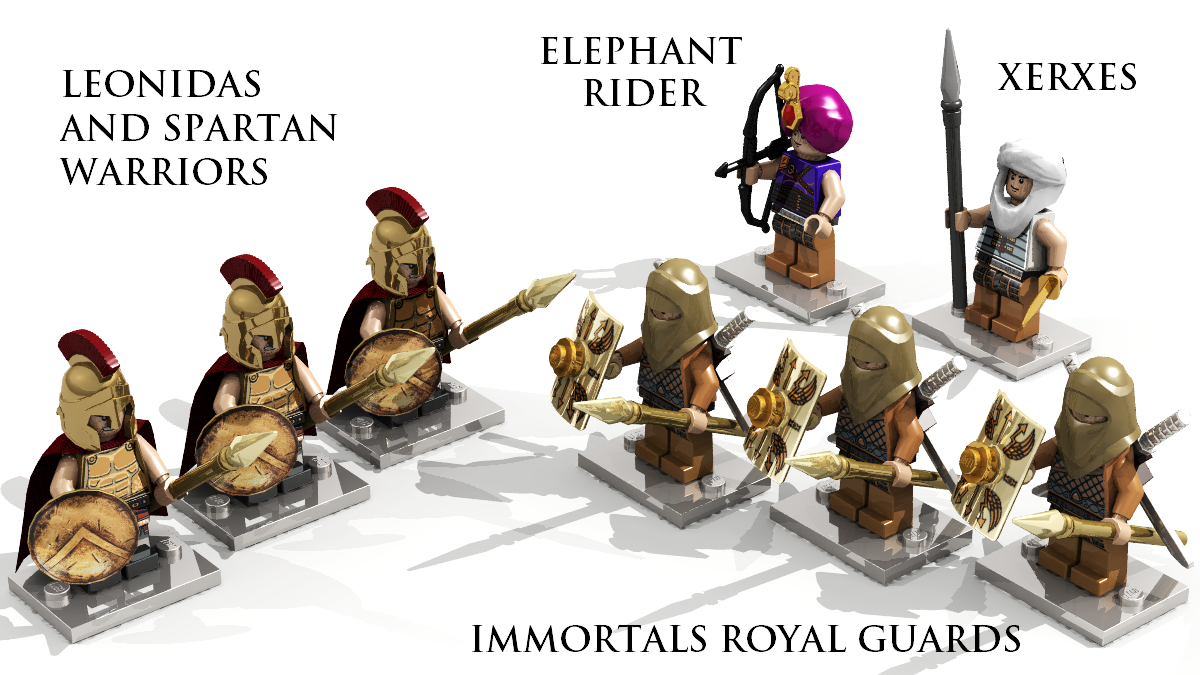 The Laconic quips of Leonidas are all genuine. Here, he prepares his troops for the fight:

As soon as you have done that, you are ready to continue your journey onward to Civilizations and Empires, Level 8: Leif Eriksson Enters the Nexus of Bifrost...

This starter set could be between $40 and $50, depending on what elements they include. It would be very easy to scale this concept up or down, simply by copying or deleting things.

This design gives you 16 extra golden Roman-style shields that you can use for any civ!

Naptha-grenades were invented in Assyria, in Mesopotamia, circa 800 BC. Further research into combustible armaments eventually led to the secret formula for the famous Greek Fire.

War elephants were trained in India, following a centuries-old tradition of preparing them to take the field bravely. They traveled with their trainers, and worked from Carthage to Persia.

Every civilization has their own banner, which they can hold proudly in their vexillum battle-standard, or on an elephant, or over the walls of a fort, or up in the rafters of their temple.

I purposefully made the Greek banners look like fraternities, partly because there are lots of cool movies with the fraternities as heroes and anti-heroes and as the underdogs. In fact, the earliest fraternities chose three Greek letters in their names, because they wanted to style themselves after warriors in factions or city-states of the Ancient World.

The letters on the Spartan banner stand for "Laconia" or "Lakedaimonia". The writing on the elephant's banners reads "Xerxes, the King" in real cuneiform script in Old Persian. I want the realism in all the decorations and insignia to be a key cool attention-grabbing feature, and a draw for real historians, so I hope you like it!

If Lego feels wary about showing the Persians for any reason, then they can always make the set with Spartans versus Titans, with hordes of Minotaurs, clans of Cyclopses, and a variety of Lesser Gorgons like Euryale and Stheno as foot-soldiers. The Titans have a banner too, inscribed with a semi-fictitious language called "Proto-Proto Glyphs".

Or hey, if they want to make it "Spartans versus Romans", that would be a guaranteed best seller, although they usually spread the minifigs out a bit more across several sets. Let them know what you like in the final comments box when you click to vote!

Again, this is a set in my series of archaeological models, the Infinitely Modular Classical Temple Building Project. It is based on the real-life historical encounter between Leonidas and Xerxes at the site of Thermopylae in Ancient Greece in 480 BC, a pivotal moment in Western Civilization, and it is not based on any particular book, graphic novel, or movie.