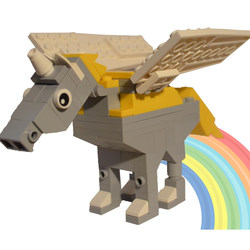 Charging My Laser... Hear that? You'd better start running or D.A.R.R.E.N. (the Data Analyzing Robot for the Ruthless Extermination of Noobs) will laser you!

This set is based off the popular TV series, Good Game Spawn Point. It includes the four hosts: Bajo, Hex, Goose (minifigures) and Darren (brick model figure) as well as the two iconic couches.

The Darren brick figure can rotate it's head 360 degrees around and his pasta scoop hands can now hold videogame controllers or even the Noob Cup! He also lasers minifigures, de- noobify any minifigure! The iconic Good Game couches are to scale with Darren and can seat minifigures!

If you've ever watched the show you'll know how awesome this set would be. It could even come with a toasted cheese sandwich voucher! (very unlikely- however still awesome) If you want this to be a set then please support! Thanks,