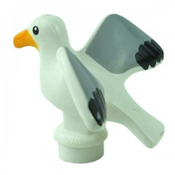 By Mouette
18 comments
This construction is a reproduction of K.I.T.T, the famous car of Michael Knight in the serie K-2000. I had the idea to build this particular car because I'm a huge fan of the show and  I also always wanted to see K.I.T.T become a lego set, ether from me or from another Lego fan.
K.I.T.T. would probably make a very good Lego Idea set because besides being a television figure of the 80's, Lego car fans could also be an interested audience. The Lego Idea range already has references from that time, so, like the delorean from Back to the Future, K.I.T.T could join this trend.
Useful informations :
- The official Michael Knight character fits into the car.
- The car can welcome two lego characters.
- Roof and doors can be opened and closed.
- And seats are removable.
The design and construction of this set was a real pleasure. I hope you enjoy it.