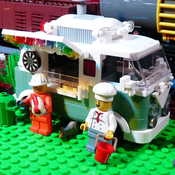 By Dr Snotson
49 comments
Dear train-, creator-, collector- and ideas-headz all around the world!
Since the raise from my dark age on the one hand I steadily gained solid experience in the design of various train-MOCs. But on the other hand, I always wondered which of my large loco rooster I should submit to LEGO-ideas. Although I was asked lots of times to do so again and again, obviously most of my locos are not suitable for the TLC-program due to my individual approaches to the design of details or windows or they depend on old, rare or third-party-parts like M- or XXL-sized-wheels or custom rods which TLC would not even feature in our wildest dreams.
For sure the “blue lady” – the german Baureihe 01 is the all-time flagship of my big fleet of german locos. I love the extraordinaire dark blue livery with silver boiler rings which provides a perfect contrast to the classic red chassis with the huge XXL-wheels. My version is numbered with the birthday of my beloved wife. But as I mentioned before extra-large sized wheels, rare and abandoned parts are not an option in this competition. That`s why I chose the little sister of the Baureihe 01 – the Baureihe 03. Together these steam locos were the backbone of the high-speed passenger trains after World War II uniting Europe again.
Now this is the moment to leave the “pro-MOC-attitude” concerning the issues discussed above behind, change the builder’s perspective and deal with the real limitations of a TLC-designer – all way down the long road from the very beginning to the bitter sweet end of the design-process. It felt like I had to melt down all of my skills and solutions before I could merge these two worlds.
First of all, my design features smaller L-sized-TLC-wheels. Next step was shortening of the engine and tender by several studs. Furthermore, I eliminated all weak “adult-solutions” and excluded all rare and old parts.
You can use an PU- or PF-L-Motor placed underneath the boiler between the last main axle and the rear axle to power the main axle (pro/realistic driving characteristics) or put up to two PU- or PF-train-motors underneath the tender (for the speed-headz and crash-kids among you). There is enough space inside the tender for both a PF-IR-Receiver and a PF-batery box or a single PU-Hub of course. Did I mention lights? You can light up 2 of the headlights and 2 of the rear lights with PF or PU.
The result is a pro-like-design loaded with tons of details and a high recognition faktor which is already 100 % TLC-conform. Calling it a product does not sound that cool at all. Last but not least, stats: the loco itself as a length of approx. 64 studs and consists of 1.580 parts in 287 lots. And… yes, you can also build it in standard black DB- or TLC-livery. Remember those LEGO steamers from the so-called grey era like 7750?
I hope, you like my TLC-approach to the Baureihe 03 and I really would appreciate either support or as well critics. Anyways, leave a comment! Although, this is not meant to be a push-and-pull-train, push it hard! It is time for a European steamer, the race is on, lets make LEGO-trains great again, Simon!