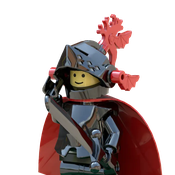 By Sir Legolot
135 comments
I really loved playing with the lego castles as a child – seeing all the ways you could recombine the sections and create new castles out of them. The goal of this castle is to give you access to all that fun out of a single box.
It has a large number of wall sections and towers that you can combine using hinged connectors to produce all kinds of alternate builds. As well as that it has mini builds which you can rebuild and reconfigure – it has a small stable for the castle horses that can become the tiltyard for a joust, and a cart that can be configured as a catapult or a transport for barrels of wine.
Rather than complex greebling, this castle is designed to look like a working medieval castle – with the stone outside being smoothed by daub and whitewash. As a result, the detail comes from the symmetry of the crenelations, crossbow slots and machicolations. These visual features also are also designed as play features – you can drop rocks through the machicolations pose Minifigures to duck behind the crenellations and aim crossbows through the slots.
Limitless play
This set combines with itself to produce larger and larger castles. Because the keep and gatehouse are modular you can combine them in near-limitless ways to produce visually distinct yet harmonious buildings.
This means that with two sets you can turn the gatehouse into a proper barbican, an entrance with gates on either side, towers that flank the front gate and an area that attackers get trapped in, surrounded by places defenders can fire crossbows from or drop rocks from.
Alternately you could use a second set to build a second bailey – a second castle that shares it’s walls with the first, that you have to go through the first to get to; or an inner and outer wall – two sets of walls that circle round the keep to ensure invaders can’t get through.
And you don’t have to stop there! Who knows what you could do by adding a 3 set or combining it with bricks from your collection.
Exciting Minifigures
The planned Minifigures include a king, a princess and her griffon, the kings champion, two knights and their horses, three guards and 4 Vikings with a horse and a small cart. This gives a vast number of play scenarios.
Are the Vikings, coming to spectate at the joust?
Are they using the cart to bring things to trade?
Do they have a griffon egg in their barrels?
Are they going to try and conquer the castle?
Are all of the knights and guards loyal to the king, or do some of them want to join the Vikings?
The goal of this model is to get everyone thinking like a child -getting excited about all the ways you can build this castle, all the scenarios the Minifigures can be posed into, and learning through play about castles!