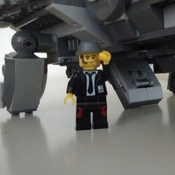 By nathanuswim
54 comments
Hello! This is a fully articulated model of a robotic human left hand. The four fingers feature three joints each and the thumb features two joints, just like a real hand. The thumb even features a series of Technic pins to make it fully opposable. The palm is just solid and flat, unlike a real hand, but I don't think that detracts from the articulation at all, because of the range of movement in the fingers and thumb.
The model can be put into a wide variety of realistic hand positions, such as forming a fist, holding up any number of fingers (4 is pictured), snapping, performing the Jedi mind-trick from Star Wars, or even holding small objects like a pencil or a minifigure (no, these wouldn't be included :D). The hand is attached via a technic pin to a sturdy base for display.
I realize this project is (much) smaller than the majority of the sets made by Lego Ideas, but I think it would make a great set for two main reasons: display and customization.
The pictures really don't do it justice; the articulation is pretty impressive and fun to mess with in person, and I think this model would be a great, eye-catching addition to anyone's desktop. People would enjoy displaying it in different positions. In addition, it's neat to see how the joints in a real hand work through a Lego interpretation of one.
I used dark red and light gray styling, largely because that's the color I had for the finger joints and then I decided to keep going with it for the rest of the model. However, this could easily be a customizable feature for the set. With the exception of some parts towards the middle of the hand, the dark red coloring is all pieces like the fingertips or exterior panels stuck on top of structure. An idea for the finished set would be to include several different colored sets of those panels so people could change the final look of the hand - dark red, dark blue, silver and gold.... Also, I made a left hand because I'm left-handed, but you could just switch a couple pieces around to put the thumb on the other side.
As others on here have noted, hitting that support button is free, so if you want a big red Lego hand on YOUR desk, go ahead and click it! Thanks!