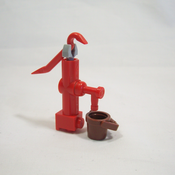 The Very Large Array is one of the largest operating radio telescope in the world. Located in the Plains of San Agustin in New Mexico, the Very Large Array consists of of 27 radio antennas. Each antenna has an 82-foot dish, and the entire array has 4 different configurations along a Y-shaped track. In the smallest configuration, the array has a diameter of 2/3 of a mile, and at it's largest, nearly 23 miles! To get to a new posistion, each antenna is moved using a specially designed rail truck, called a transporter. The VLA has been used to make numerous discoveries, and was used to follow up on the Wow! signal. It was renamed in 2013 to the Karl G. Janksy Very Large Array. It was renamed for him as he is referred to as the father of radio astronomy since he discovered it in 1931.

The Array has been featured in movies such as Independence Day (1996), Terminator: Salvation (2009), and most notably, Contact (1997), making the array quite recognizable.

My Lego project is one of the 27 antennas that are part of the array. It would be difficult ot propose the complete array at minifig scale, or close to it, which is why I decided on 1 antenna. The model can be positioned in the same manner as the real thing, as described on the NRAO website “it tilts up and down and spins around.” The LDD model uses 2704 pieces, and the model shown is slightly smaller than minifigure scale. The diameter of the dish is nearly 70 studs (About 22 inches) in diameter, and is approximately 80 studs (About 25 inches) tall when pointing directly up.

Being a fan of astronomy and LEGO, this is something I've wanted to see as a set. However, up until this point I had not tried building one as I did not have the pieces to do so, until I downloaded LDD. Because of how recognizable the array is, this would make a great addition to any space fans collection.