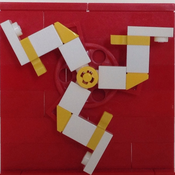 By gregnat73
30 comments
This build is inspired by the real life historic vessel "Peggy" from Castletown here in the Isle of Man.
History
The original Peggy was built in 1789 for a prominent local businessman and politician, George Quayle, and was originally designed as a small pleasure vessel and racing yacht. As well as 6 oar-ports and a schooner rigged sail plan, she was one of the first vessels to be fitted with sliding keels. These 3 keels could be raised or lowered depending on the conditions to maximise speed and stability. In 1796, Quayle sailed the Peggy over to England, transported her overland, and took part in a regatta on Lake Windermere with great success. During an eventful return journey, he survived a storm thanks to Peggy's sturdy design.
In 1802, the Peggy underwent some modifications which saw the sides raised, the oar ports filled in and the sliding keels and associated mechanisms removed. This made the vessel a pure sailing boat, more seaworthy and able to carry a small amount of cargo or passengers. She was also armed with 6 light swivel guns and 2 larger stern chaser cannons. Some people have suggested these changes imply that Quayle was involved in smuggling! (especially as he had a private dock and boat house cellar built into his house!). Although as Quayle was also an officer in the local defence force, and this was at the height of the Napoleonic wars, the armament might have been to provide protection from French privateers.
When George Quayle died in 1835, the Peggy was simply bricked up in her boat cellar and forgotten about. Then in 1935, she was rediscovered still in excellent condition along with her masts, spars, guns and even the original sliding keels. In the 1940s/50s Quayle's house became a Nautical Museum with the Peggy in her boat cellar as the centrepiece.
The Peggy is currently registered as part of the UK's National Historic Fleet as she is considered to be the oldest surviving schooner rigged vessel, the oldest vessel to have sliding keels and one of the best preserved examples of a non-military 18th century craft.
In 2015 the increasing risk of flooding and gradually deteriorating condition of the boat saw the Peggy moved from her home of over 200 years. She was taken to a temperature and humidity controlled facility where modern technology will be used to fully examine and record her structure and stabilise and restore any damage. She is due to return to public view in 2025 but for now, you can view her in LEGO form!
The Build
I've always been interested in local history, especially that relating to the sea, so building a LEGO version of the Peggy seemed a great idea! I based the build on her post 1802 appearance with a brick built hull (which took some experimenting with but it's pretty sturdy... it's even quite swooshable!). The sails are also brick built with an option to have the boat with sails or just the masts/spars.
I went for a minifig scale and included a crew (the owner/captain is based on an image of George Quayle), removable guns and cargo. I've also created simple stickers for the Manx flag and name plates.
The basic colour scheme is based on her current appearance and was applied in the 1950s when she became a museum exhibit. The recent restoration work has uncovered previous paint schemes. It seems her hull was originally white with a green stripe along the top and a red interior. After the 1802 alterations, she was painted ochre (dark tan?). I hope to recreate these schemes in future updates.
I think this would make a great kit as it appeals to anyone with an interest in maritime history or the sea. I've designed a simple display base so the boat can be displayed (with options to have it with or without sails). Being minifig scale means it can also be "played with" and used as part of a larger display or layout. Despite being from a later period, I think she'd look good as part of a pirate layout or any harbour/port scene up to the modern day.
Thanks for looking and please consider giving "Peggy" your support!