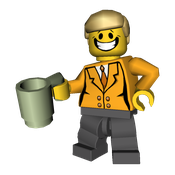 By Mr. Cup of Fail
21 comments

The figure is made by mixing CCBS and system, while torso are majority system and limbs are majority CCBS; the torso has the CCBS long torso bone piece and built around that with system.

The figure has an open and close visor and a removable backpack and tubes (need to take pieces off the chest to remove the smaller tube). It also comes with tools that are used to do maintenance on space stations, obviously having the safety tethers and tool belt as well to be attachable.

While the CCBS human heads are something that is disliked, the adding of system which add some texture rather than printing, really helps not make it too ugly. Which the current humans head that are around, Chirrut Îmwe from the Rogue One is a perfect size and can move around in the helmet greatly.

Hopefully with a set of this concept, could get more people to try mixing CCBS and system, along with pleasing the fans of the two building system.

Not to mention learning about the design of space suits, about maintaining a space station and extravehicular activity (EVA). along with the history of the first person who spacewalk (Alexey Leonov), the first person who did in-flight repair (Stephen Robinson) and more in history relating to EVA.

Please support the project if you like and want to have your own astronaut buildable figure, and share wherever for this to become an official set.

By Mr. Cup of Fail
21 comments