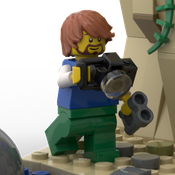 By BrickPapa1
38 comments
Air Cargo Control
Every day, thousands of goods are moved by air freight. This air cargo is carefully inspected before it is loaded onto an airplane. The type of inspection depends on the type of cargo, but in most cases the cargo is inspected by X-ray machines. These use X-rays to check the contents in conjunction with the shipping documents. If there is a clear picture on the control monitors that matches the content of the freight documents, then the freight can be released and stowed on the plane. Should it be that no clear picture is recognizable, still additional aids are used around to exclude that a danger of the freight proceeds.
The idea for this model was born when I had to explain the work of cargo inspection to my children, to make this more vivid I created a model that shows two different cargo X-ray machines of the leading manufacturers.
It shows how the cargo is brought to the X-ray machine, it is transported through the tunnel with the conveyor belts and the colleague in the command center makes the decision via the monitor whether this air cargo is safe or unsafe.
If it turns out that the cargo must be subjected to a further inspection because nothing can be seen on the X-ray image. Then everything is examined from the outside and inside by means of an explosive trace detector. If everything is okay, the cargo can be transported by plane.
The model represents a section of an individual part of a cargo storage hall, as they exist in different sizes worldwide.
The employees go about their work with concentration.
There is an electric lifting arm as it is found in many warehouses.
Two different X-ray machines and an explosives trace detector.
The roof of the command center is removable for a better view of the interior. There are tools ready to open the cargo. One employee came to work on an e-bike, which was parked between the X-ray machines. There is enough space in the command center for two employees to operate one X-ray machine at a time. For the physical well-being a coffee machine is ready.
Digital 1727 single bricks were used. It is 60 studs long and 38 studs wide. It has three minifigures and an e-bike.
In our Lego City was always missing until now a cargo control area to transport safe air cargo with the Lego planes.
I hope you like the model?