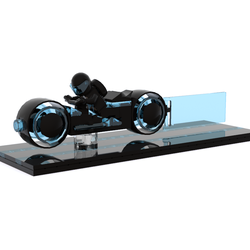 Tron is a 1982 American science fiction film starring Jeff Bridges as a computer programmer who is transported inside the software world of a mainframe computer where he interacts with programs in his attempt to escape.

The Tron Light Cycle is an iconic feature in both movies and the Light Cycle races are focal points of the movies.

This is my interpretation of a Lego Tron Light Cycle. I have tried to keep the part count low using about 50 pieces for the bike; the stand is for show but could be incorporated into the final model. One of the main parts of my concept was to integrate the rider into the bike, which I believe I achieved pretty well.

I welcome any comments or suggestions and I hope you enjoy and share.