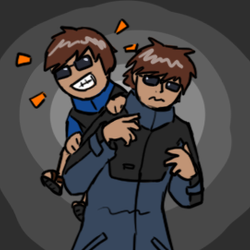 The idea behind this project is to design a monster truck themed set.  It started out with just Grave Digger, but from there I ended up creating Big Foot as well.  Grave Digger and Big Foot are two of the best known trucks out there so I thought it would be cool if they where to become Lego models.  Both of these trucks feature the same chassis design with the only difference being a few color differences.  This chassis was designed to be modular and can serve as a base for creating other monster trucks.

Of course what are monster trucks without an arena to play in?  After designing the trucks I ended up designing some arena accessories for them.  These Accessories include a jump, a couple of semi crushable cars, and some various barriers, barrels, and markers to create a race course scene or just to play with.  The crushable cars are also designed in such a way that they can be used as demolition derby vehicles!

Should this project hit 10'000 support the idea is open for interpetation on Lego's part.  It could be scaled down to a more standard City Size vehicle set, or one of the trucks could be scaled up to become an ultimate collectors edition size vehicle.  Also the contents of the arena which I will admit I went a little overboard on can altered.

There is a few things missing from the model photographs though. First up is the minifigures, I could not create them using LDD as they would require custom printing. Second is stickers for the trucks, both require some mini sponsor logos on the sides of the chassis as well as some stickers to help replicate their custom paint jobs.