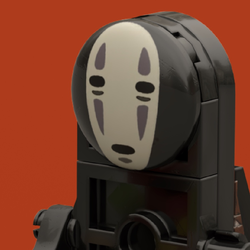 "listen, Haku. I don't remember it, but my mom told me... Once, when I was little, I fell into a river. She said they'd drained it and built things on top, but I've just remembered. The river was called... Its name was the Kohaku River, your real name is Kohaku."

Miyazaki's Spirited Away is one of the greatest animated movies of all time. The film was released on July 20, 2001, and became the most successful film in Japanese history, grossing about $270–350 million worldwide.

It tells the story of Chihiro, a sullen ten-year-old girl who, while moving to a new neighborhood, enters the spirit world. After her parents are transformed into pigs by the witch Yubaba, Chihiro takes a job working in Yubaba's bathhouse to find a way to free herself and her parents and return to the human world.

I have created the project to capture this wonderful movie, and in doing so I propose a LEGO model of dragon Haku. It has around 500 pieces and would come with two minifigures: Chihiro and Haku. Also included are Boh as a rat, Yubaba's crow as a small bird and one of Zeniba's paper birds.

The hardest part in designing this project was the head because I tried to get all the detail from the film in it and I think it came out quite good, even if it is too big.

Dragon Haku includes a head, tail, whiskers, opening and closing mouth, fur down the majority of his body and fifteen movable joints.

Sorry if the figures don't look that great, I was in a rush and had just got photoshop. Improved figs may come soon!

please tell me what you think of the set and if you have any suggestions, make sure to say!

Please hit the blue support button if you want LEGO Spirited Away to become a real thing! LEGO and studio ghibli could be one of the greatest combinations in the company's history!

Please support and follow this project and you could own one for yourself!