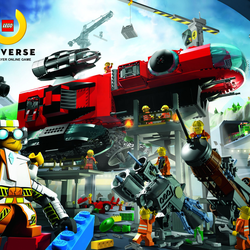 By TheKarlin
7 comments
Hey LEGO fans! (There's no Hieroglyphics on Google Translate) Anyway, remember that 8-winged space fighter I mentioned in one of my previous projects? Well I finally got around to building it last week. I just figured out how the wings would work and the rest simply fell into place. I hope you like it. Yes, I realize it looks a little like something from Star Wars but it's not, I checked. I decided not to write an LU-based back-story for this so that you could use your own imagination more freely.

Just like in modern military helicopters, the gunner's position is in front of the pilot's, allowing him to better see his target.

I must ask, as i always do that you please leave some sort of comment especially if you support. I want your input and opinions. Tell me what you like. Tell me about your projects. Say anything!