The Hobbit - Riddles in the Dark 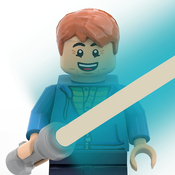 'Riddles in the Dark' is perhaps the most iconic scene in both An Unexpected Journey and Tolkien's original novel. I decided to therefore design the diorama with both my interpretation of the scene after reading The Hobbit and Peter Jackson's - the director of the films - in mind. I chose to recreate this scene in particular as it, not only is one of the most memorable, but also perhaps the scene which eludes to the events of The Lord of the Rings the most. In this scene we are introduced to not only Gollum (or Sméagol) but the One Ring as well. Gollum is introduced to the audience in this scene, who shows us the Ring's control over the wearer.
The Build - The rockwork in the build is created using SNOT (Studs not on Top) techniques and layering both wedge pieces and plates to create texture and a relatively clean look. The lake in the build, on the other hand, is created with black tiled pieces in order for it to look very different from the rock formations in the foreground of the build. The model is made up of 669 original LEGO elements, with the most common colour used being dark-bluish grey and the most common part being the cheese slope.
Details - In order to make the build as detailed as possible, many cheese slope pieces, rock pieces, 1x1 round plates and bone pieces were utilised to elevate the model of Gollum's Cave. The bone piece's were used in reference to Peter Jackson's version of the cave, as we see Gollum digging through the remains of the goblins he had killed to find the One Ring. I decided to use the cheese slopes and round plates to imitate both rocks jutting out in the cave as well as plant-life. Finally, the 1x1 rock/crystal pieces were used to create added detail the slope and round plate pieces could not, though these elements in the build are in colours currently not produced by LEGO.
The Minifigures - The two minifigures used in the diorama are of course Bilbo Baggins and Gollum. Both of the figures have been given specific tiles to stand on. The Gollum minifigure uses the same printed piece that featured in set 9470 (Shelob Attacks) however uses a skeleton armpiece, unlike that version of the figure. The Bilbo minifigure is a custom. The hair piece used is in 'Fabuland Brown' and both the head and torso feature custom prints!
Thanks a million for reading and I hope you think the model is worthy of your support!