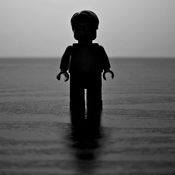 Chuck Chuck Chicken is a simple model anyone can build.

He's a cartoon chicken and he's full of attitude. His facial expression is somewhere between inquisitive and startled (depending on the rotation of the eyes).

It is made up of fairly standard pieces found in the Lego Creative series. (Ideally the hinges and a couple of bricks on his tail would work better in white, however I worked with the pieces I had - However, I think the wing hinges actually complement the chicken's face and feet).

He's approximately 4 inches high, very sturdy, and is made from around 50 bricks.