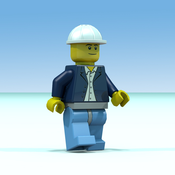 An Italian garden is a formal type of garden developed during the Renaissance period. It is inspired by classical ideas of order and beauty. It is characterized by a geometric subdivision of the space by means of gravel paths, hedges, trees, potted plants and flower beds. It often includes water features and statues.

I enjoy visiting Italian classical gardens and I’ve tried to capture as much as I could of their essence in these two different builds:

I’ve also added a larger version created by combining two copies of this proposed set. Although, that would probably prove quite expensive, I wanted to show you further possibilities.

No minifigures are included because I didn’t have a particular back-story in mind. I think it could be a possible setting for a storyline that takes place either in the present day or in the past; it could be a historical site inside a modern city that you can go visit or could be part of a palace from another time where some noble family would live.

I think it would also make a nice display set.

I’ve included in both versions two small chairs (integrated into the side walls) that can be moved around and placed wherever you like to enjoy your own favorite spots.

You also get a golden coin to throw in the fountain and don’t forget to make a wish!

If you would like to see this project as an official LEGO Ideas set, please, support and share it.