Pirates in a Bottle 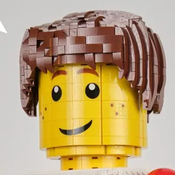 Ahoy mates, The Pirates are back!

Build, play or display your favorite characters and ships in LEGO
Enjoy the movie and please share with your friends as much as you like to make this set real.

Project designed by Stephan Niks (aka Stephanix) in LEGO Digital Designer
Animation and rendering  in 3D Studio MAX Mental Ray
Movie opening scene animated and rendered in Lumion
The movie is a sequence of 3400+ Full HD images with an average render time of 6 minutes each, totals 340 render hours.