Lego Midna from The Legend Of Zelda (Twilight Princess) 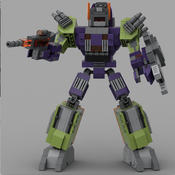 By MasterBuilder110
18 comments
Lego Midna. I have actually built this with real Lego, but this site would not let me upload the image I took of it. I designed and built her because I like her aesthetics and characterisations which I feel my design shows. In the video game of Legend Of Zelda Twilight Princess, Midna is an Imp who is very clever with unique skills which I think my interpretation of shows in my design.
I think this would appeal to many groups of people with differing interests, e.g. gamers, Legend Of Zelda fans and also those who just like the look of her.
I got the idea to build this from an official rendered image which is quite different to my build, but what I have done is built her to show her image and her purpose within the game she is from.