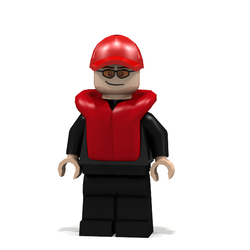 Joshua Slocum (Annapolis, February 20, 1844 – Atlantic Ocean, on or shortly after November 14, 1909) was the first man to sail single-handed around the world. He was a Nova Scotian born, naturalised American seaman and adventurer, and a noted writer. In 1900 he wrote a book about his journey, Sailing Alone Around the World, which became an international best-seller. He disappeared in November 1909 while aboard his boat, the Spray.

On board for the first time at age 14, after a rapid ascent to commander, a lifetime of sailing on merchant ships and a shipwreck that caused him to lose all his possessions, one day in the middle of the winter of 1892, he had a strange offer from an old commander whaler: he gave him his sloop in disarmament for free. The next day, Slocum discovered that the boat was a wreck, an old wood from 1801 called Spray. So he decided to rebuild it alone.

On the evening of April 24, 1895, at age 51, Slocum sailed with the Spray from Boston aimlessly. Three years, two months and two days later, on June 27, 1898, after a journey of 46,000 miles, at 01:00 he dropped the anchor in the port of Newport. He had circumnavigated the globe, from east to west, passing through the Strait of Magellan and the Tierra del Fuego, and all this in an era in which cross oceans alone was even considered impossible. The book about his journey, Sailing Alone Around the World, had a great success.

None of the feats carried by the great navigators who made ​​the history of sailing in subsequent years could have taken place without the journey of Joshua Slocum. Like all great myths of history, his death is shrouded in mystery. In 1909, at age 65, Joshua Slocum sailed for the last time with the Spray to the West Indies. He never came back. Neither Joshua Slocum nor Spray were found again.

The model is Spray in minifig scale, equipped with the rig used to circumnavigate the globe. She counts of 1044 bricks and has an openable deckhouse with a simple interior. The details visible on the deck, such as the two anchors and their weighing mechanism, the double deckhouse and the two barrels, are as faithful as possible to the original, thus considering that nowadays there are only copies and scale models of the boat, and the original photos are few and in b&w. The model includes a minifig that is Joshua Slocum itself, dressed in late ‘800 style, similar to his photos available on the internet.

For higher res pictures see also on my Flickr: