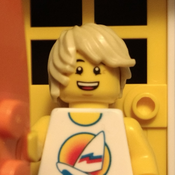 By Gold Puffin
81 comments
Among Us is a hugely popular game, and a new map is coming in 2021 - the airship, based on the Toppat Clan Airship from Henry Stickmin.
Everyone is excited to play the Airship map, and it looks amazing from the outside as well as on the inside. The bright red colour scheme is striking and the curved design, abundance of windows, and big engines make for a real challenge in terms of building.
The Lego community has really taken to Among Us, with many brickfims and build tutorials racking up thousands or even millions of views on YouTube. The Airship would make a great display piece for older Lego fans, but would also have great playability with the ability to lift off the top and play with crewmate and imposter figures inside. I think fans of both Among Us and Henry Stickmin alike would love to see the airship in Lego!
You can see a video about this MOC here:
Please note:
* If Lego make this set they would definitely need to make the back engines bigger - I didn't have the pieces to make them the right size
* I know the interior design could be improved, but I wanted to give an impression of what it might look like
* Proper propellor pieces for the engines would improve the design, and the front engines could be built in a more sturdy and elegant way with access to the right pieces