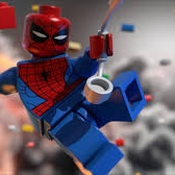 Reed Richards (Mr.Fantastic), the husband of Sue Storm with the power to extend his body (his mini-figure will include an alternate torso to which long arms can be attached)

The Thing (Ben Grimm), one of Sue Storm's friend who can turn into a big rocky guy. The Thing has two stud shooters.

Silver Surfer, who can travel through space with his surfboard and is versing the Fantastic Four. Under his surfboard, there will be a silver spring loaded shooter.