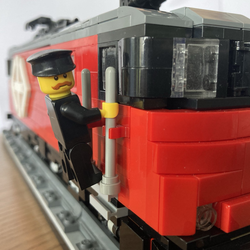 What is it?
It is a modern city (Port) on the river with a large bridge. A very large part of the set is kept in white, because I find it more elegant. And I only used the colored bricks for traffic and to recreate nature.
Why did you build it?
I didn't have many bricks left (because I built a big main station, I might upload one as well, if you want to see it, write it in the comments!) and I always wanted to build something from the Lego architecture series.

And that's exactly why I love Lego: You can also build something big from a few small bricks!
And Why do you believe this would make a great LEGO set?
Because it's not made up of colorful bricks.And it would be the first (I think) bridge in the Lego architecture series.