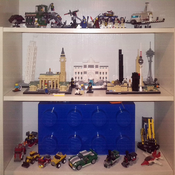 This is my Lego version of "Castel del Monte".

Castel del Monte (Italian for "Castle of the Mountain") is a 13th-century castle situated on a hill in Andria in Puglia, a region of southeast Italy. It was built during the 1240s by the Emperor Frederick II.

Described by the Enciclopedia Italiana as "the most fascinating castle built by Frederick II", in fact, in 1996 Castel del Monte was named a World Heritage Site by UNESCO, which described it as "a unique masterpiece of medieval military architecture".

It also appears on the reverse of the Italian-issue One Euro Cent coin.

Frederick II was responsible for the construction of many castles in Puglia, but Castel del Monte's geometric design was unique: the fortress is an octagonal prism with an octagonal tower at each corner.

The octagonal plan is unusual in castle design and I have used 2825 pieces of Lego to recreate this wonderful structure.

I hope you enjoyed the model and for any question don't hesitate to comment.

Thank you for reading and please support and share with your friends!