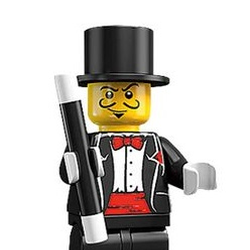 The Vengeful Vamp has been the whole proud of a bunch of unscrupulous smugglers who where known as bloodthirsty and coldhearted grave robbers. The crew digged graves of every known rich person who recently died, stealing all the goods and golds without a trace of regret! Until one night they opened the very wrong grave, just to be cursed afterwards with immortality and neverending thirst for human blood.

Henceforth the Vengeful Vamp is doomed to sail the seven seas, with the crew not being able to die or feel any human emotions, making them a dreadful threat for every ship out there.

This project is one of my first attempts to publish a ship for Lego Ideas. It was fun to work on!

The Vengeful Vamp sails with two bloodred sail planes with a huge bat print on the lower one.

It is a smaller version of a classic pirate ship, making it faster and harder to hit for enemies!

The idea for a vampire theme came from the usage of multiple bat lego pieces.

I would be glad to gain support, so share and show your friends who may be Lego fans, pirate fans, ship fans or vampire fans!