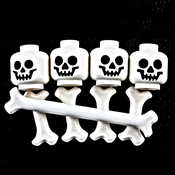 Here is an idea to make the A-Team into a LEGO set. The set would include the four original members of the A-Team, Hannibal, B.A., Faceman and Murdock, along with the A-Team’s iconic van and Face’s Vette. The A-Team is perfect for LEGOs, because you can take them on many adventures where you can rebuild and modify vehicles.

The A-Team is an American action-adventure television series, running from 1983 to 1987, about a fictional group of ex–United States Army Special Forces personnel who work as soldiers of fortune, while on the run from the Army after being branded as war criminals for a "crime they didn't commit". A feature film based on the series was released by 20th Century Fox on June 11, 2010.

In 1972, a brick commando unit was sent to prison by a military court for a crime they didn't commit. These men promptly escaped from a maximum security stockade to the Lego City underground. Today, still wanted by the government, they survive as soldiers of fortune. If you have a problem, if no one else can help, and if you can find them, maybe you can hire the A-Team...

The main part of the set is the van. It has a removable roof and two doors and has the iconic red stripe on the outside achieved in an effective but subtle way.

This is an idea of old I had so I put up a few bricks together and here's what I came up with - LEGO A-TEAM.