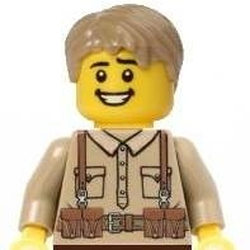 This set is a tribute to the 1975 Disney movie: “The Apple Dumpling Gang”. Located in Quake City, California, this bank plays a major role in the film. It houses the large gold nugget found by Bobby, Clovis, and Celia Bradley: the three kids who own the Commodore Mine. No one in Quake City thought there was any gold left after the Quake of ’65 pinched off the gold veins for good. But while the kids were exploring their mine, a sudden earthquake uncovered the nugget worth $87,425 (in 1879 dollars). The kids offer their nugget to The Hash Knife Outfit (Theodore Ogelvie and Amos Tucker). But they have to break into the bank to get it. They tried using a ladder to enter the skylight. They even try pulling themselves up with a rope slung over the building and pulled by a donkey on the other end. Their “sweaty dynamite”, used to blow the bank’s safe, unexpectedly explodes and blows up the bank. Amos and Theodore remain protected inside the bank safe. The gold nugget gets destroyed too; reducing it to smaller-sized gold nuggets scattered throughout Quake City’s downtown street. The rest of the minifigures in this set represent the sheriff (Homer McCoy), banker (Leonard Sharpe), and guardian of the children: Russell Donovan and his horse.

This set has a great western theme to it; something very popular with kids and AFOLs. Situated on a 32x32 baseplate, the bank can be used in anyone’s western town, ghost town or 19th century town setting.

Please support my other projects on Lego Ideas:

To see my complete collection of Lego Art and MOCs, visit: