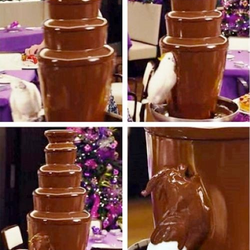 This is my second medieval style building. I designed it in a modular way so that it could be attached to my first model (shown in the first picture, the other building shown is not part of my project). The roof of the building can also be removed. Outside I included a statue and four trees.

Accessories include: two spears, two swords, one staff, four shields, and two torches. There are 2743 bricks in the model. Also there are seven minifigures.

Thank you for any support that you give. It means a lot to me.