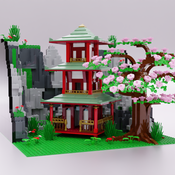 By manfredt
47 comments
Welcome to the castle of my childhood dreams!
While most castles are built to defend in times of war, this castle is built for more then that.
This particular king is pretty much a coward who'd rather hide and escape in times of combat,
this whole castle is built with one sole purpose : survive an enemy raid.
The best way of course to accomplish this is by leaving the battle unseen!
This design is filled with secret basements, secret doors and hiding places.
The whole set Hinges open in multiple parts so you can acces every part of the castle an it is built with 2390 bricks.
Features:
When I was a child I had a huge fascination for castles and secrets, I never owned a "big" LEGO castle set, so I modeled this more on another sort of castle I owned, filled with traps and secrets this would be a great set for playing, certainly with the big rooms and the added minifigures.
Minifigures:
I hope you can all enjoy this build as much as I would as a child!