Jurassic World - Hunting with the Raptors 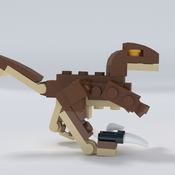 Inspired by the first teaser trailer of the upcoming Jurassic World movie I wanted to create my own set with these cool guy hunting together with his raptor friends! I've made a lot of prototypes, because I wanted my raptors to be build. I'm really happy with the result and the playability is super high. As you can see on the attached screenshots you can play different scenes from the Jurassic Park movies. Everything on the raptor is movable - ok maybe the mouth is the only exception.

So what would be inside a possible Lego set?

I've made all of this with the Lego Digital Designer (LDD), than exported it as LDraw file and finally posed and rendered it out with an open source 3D program. I'm planing to make a Making Of, but first of all let's see where this will go.

Thanks a lot for your support. Would be awesome to see this in stores some time.