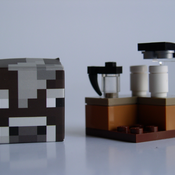 This project is based off of the Indominus Rex Paddock seen in Jurassic World. I had created a similar version before, but this is far more detailed. The paddock consists of an observation deck, a cable used to feed the I-Rex, and is filled with plants. On the outside is a staircase leading to the observation deck, crates, and support beams. Unlike my earlier version, this has the hybrid dinosaur itself! The Indominus has poseable arms and legs, and more detail. I have also included the truck that Owen hides under in the movie. One good thing is that this project would not be too expensive, and it would include a miniature Indominus Rex!

I hope you like this project! Be sure to support!