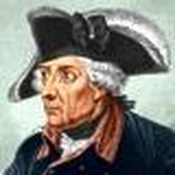 v2.0
- Redesigned reverse side of the cart to be more ornate, and include a recessed board with the theatre logo on it as well as golden statuettes.
- Added new brick-built accessory - foldable sandwich board also featuring the logo
- Updated horses to the new 2012 model (sadly without decorated details - blame LDD!)
- Re-rendered all images to reflect the altered model.

"Roll up! Come one, come all, ladies, gentlemen, little ones too! See wonders that you have never imagined! Kings, knights, princesses, perils, plots, passion, all conjured here tonight on our humble stage! Watch in amazement as we bring you tales of wonder, horror and amusement like you've never seen before!" 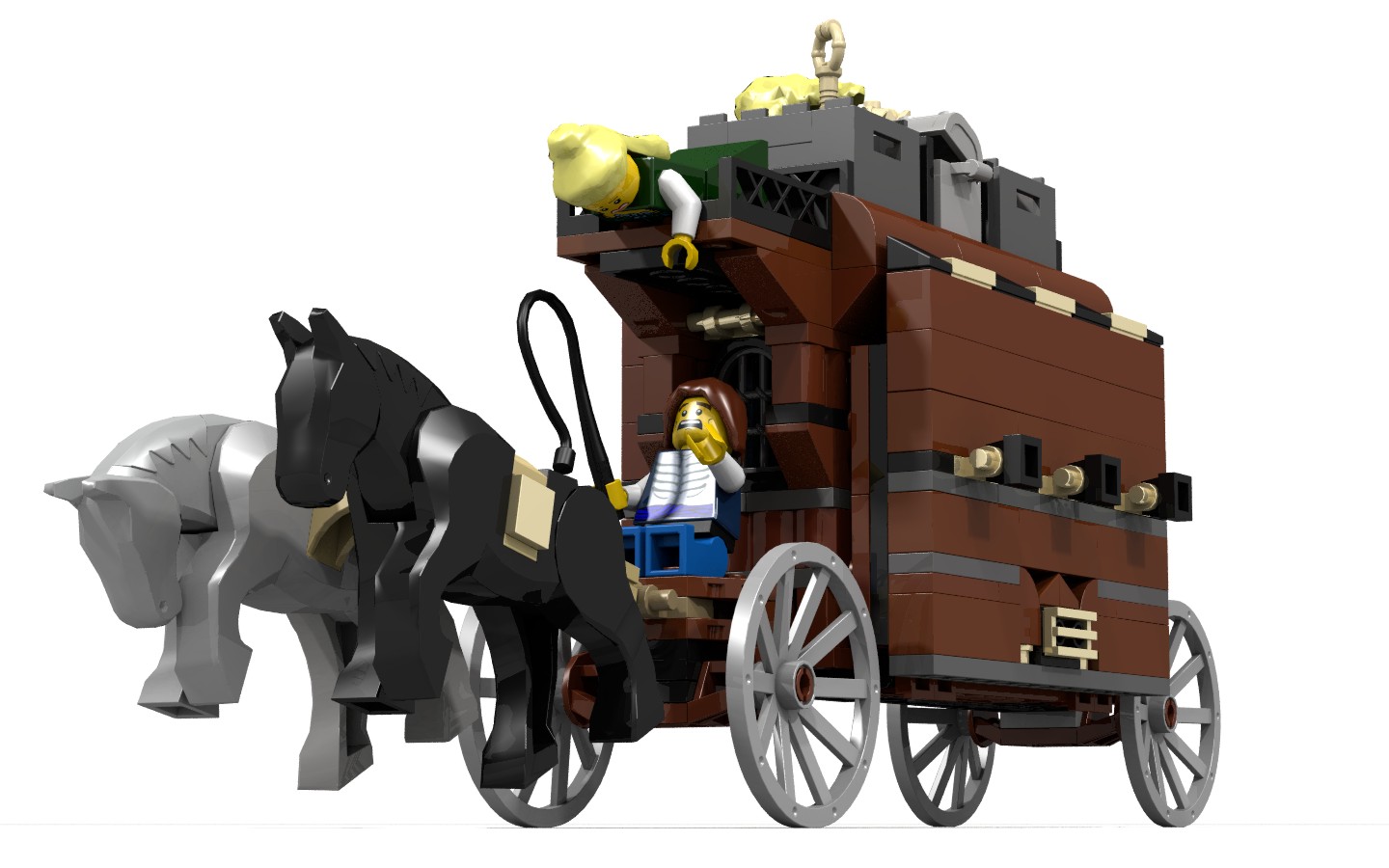 The Medieval Travelling Theatre is a standalone model that could happily fit in with any medieval or renaissance collection of Lego models. It depicts a mobile theatre company that housed in a single horse-drawn carriage. When travelling, the stage folds up into the left-hand side of the carriage, then folds down again whenever a performance is due. When open, the stage is supported by three feet that keep it level with the ground.

The set comes with two minifigures - one male and one female (yes, realistically no women were allowed to act in the middle ages, but somehow I don't think Lego want the controversy of releasing a children's toy featuring cross-dressing!). And to help them bring the magic of theatre to their medieval audiences? A whole host of props, kept in the barrels, chests and crates piled on top of the carriage. 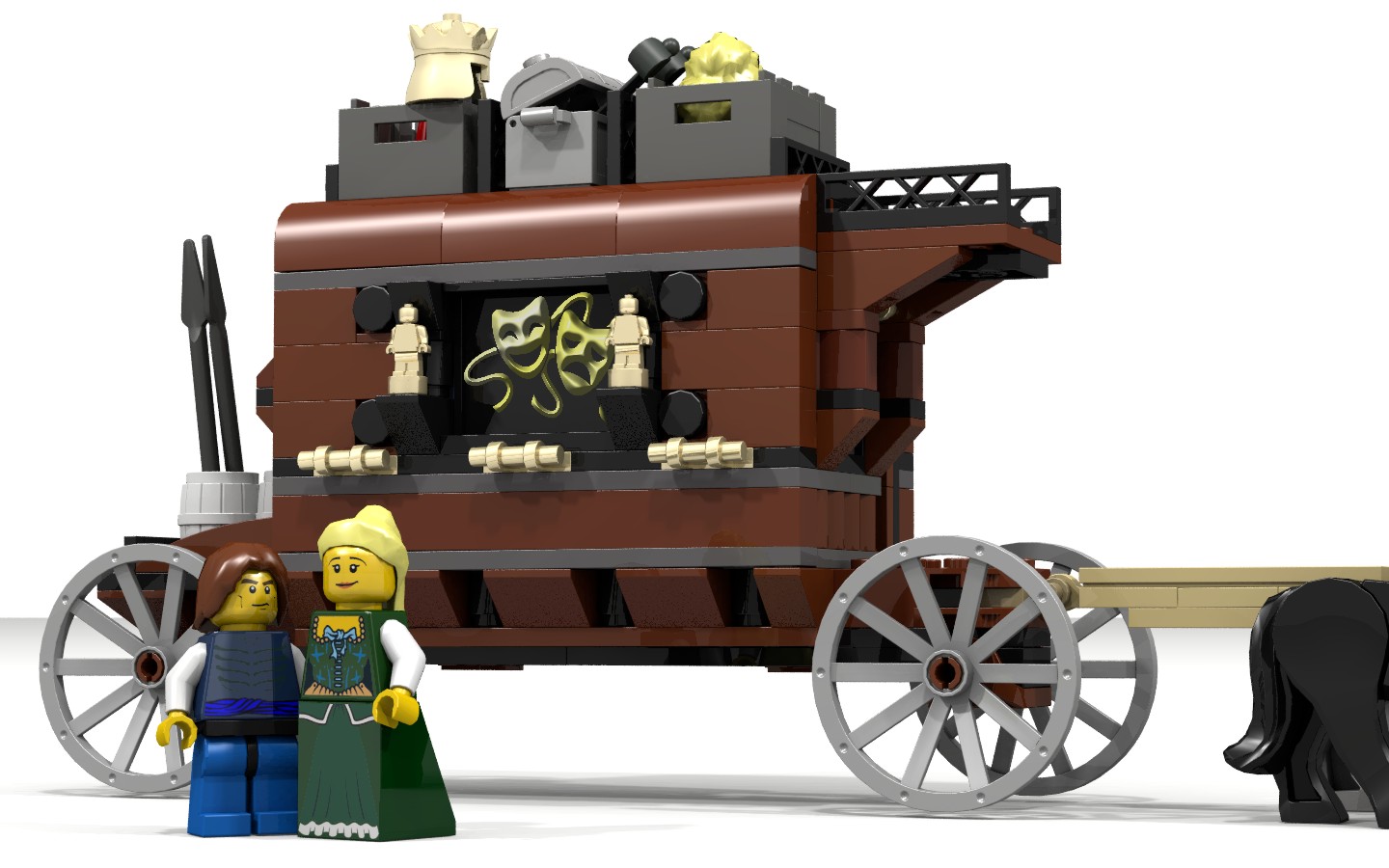 I believe this is an ideal set for Cuusoo. Not only is the final product affordable and reasonably-sized, it has tremendous play value. It suits medieval and renaissance collections, but can happily interact with minifigures and sets from many different themes. It's an ideal platform for many of the characters from the collectable minifigures to come on stage and get their 15 minutes of fame.

I hope you agree this is worth pledging your support. To see more pictures of the Medieval Travelling Theatre please check out my Flickr feed!

(All images were rendered with LDD2PovRay) 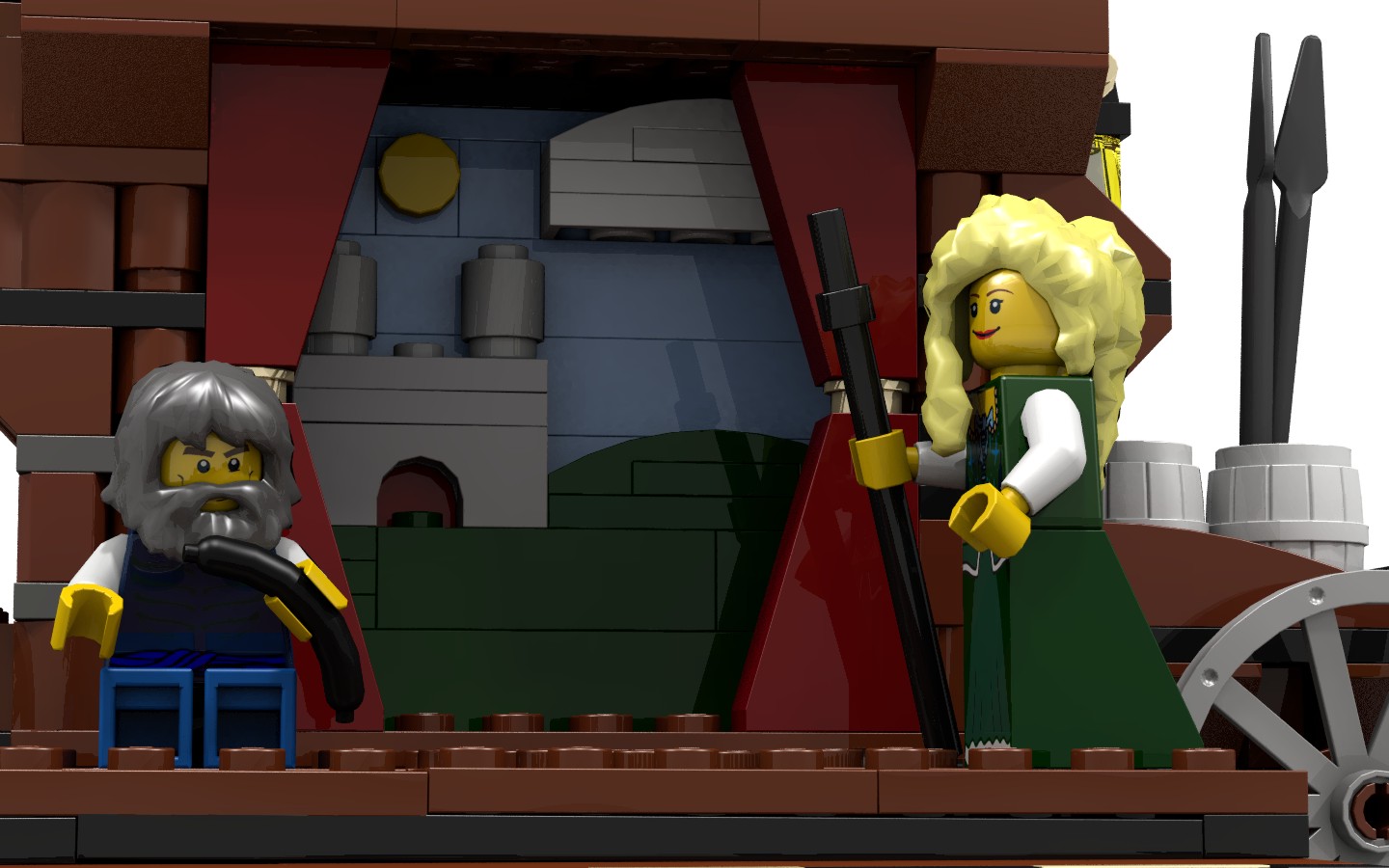 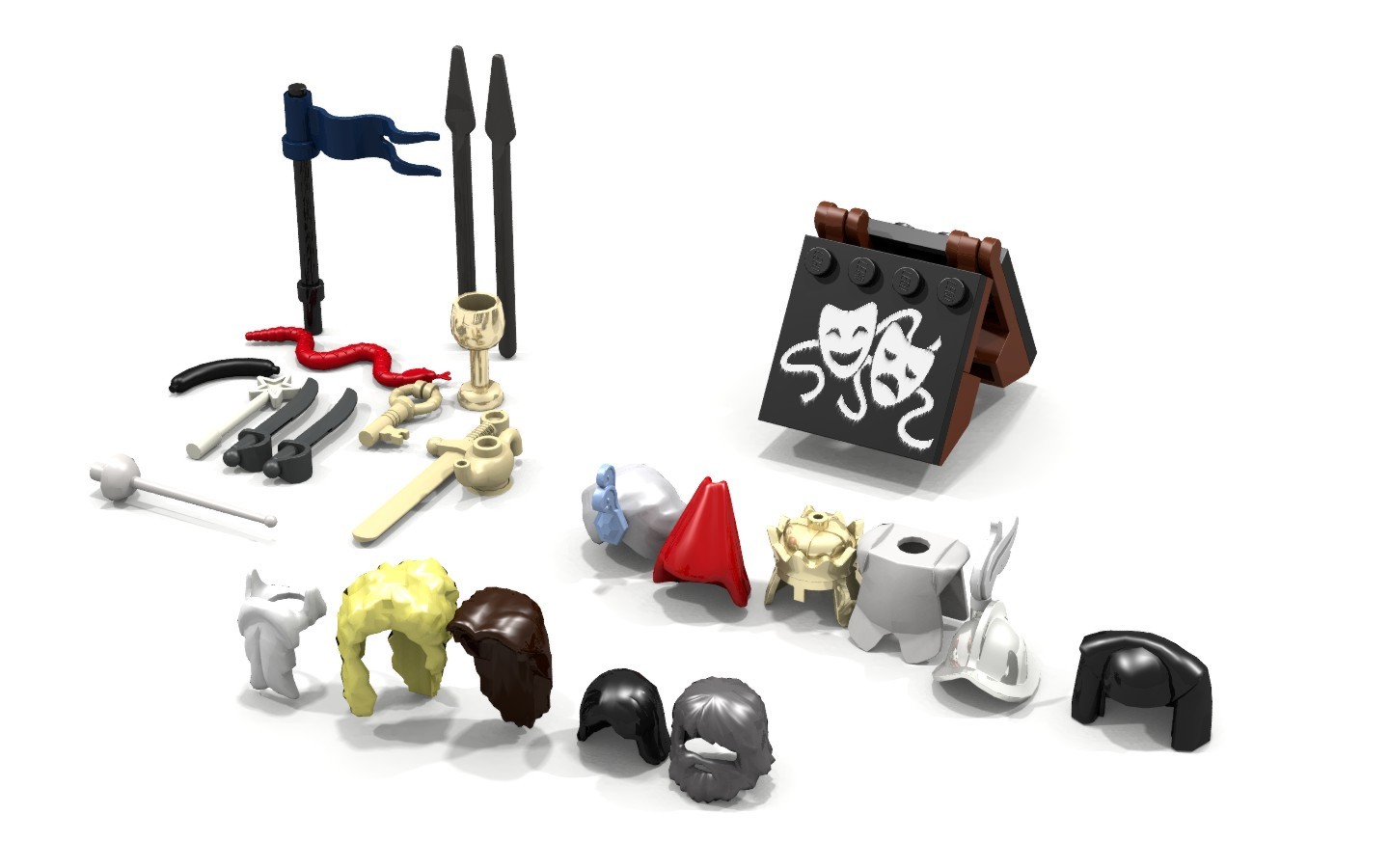 Q: "Does this model require LEGO to mould new pieces?"

A: No. Every piece used in the Medieval Travelling Theatre is a standard LEGO piece and no new moulds would be needed for the model to work. That said, there are a number of pieces used here that are NOT currently being produced in the required colours - for example, the stage floor uses CMF bases in brown, while currently these are only available in black.

Q: "Would the theatre masks logo be printed or stickered?"

A: While I am sure everybody (myself included) would love these pieces to be printed, the likelihood is that they would have stickers that would need to be applied.

Q: "Are all those prop accessories really going to be included?"

A: The minifig accessories I included for the prop chests are subject to change, depending on what fits best and what can be most easily produced by LEGO. Which is to say, none of the accessories are final. The props I included were simply the ones I most wanted to see come with the set when I designed it.

A: Like the props, the minifigures are not final. For starters, the male character should probably look more like the Actor minifig from the CMF series 8, or at least have the same ruff around his neck. However including two minifigs seemed the right number for a set this size, and at this price point. There is also only room for two minifigs on the cart while it is moving!

Q: "Would it be possible to have extra scenary backdrops that can be swapped in and out?"

A: Funnily enough I gave this idea series consideration while designing the set, but dropped the idea for two main reasons. Firstly, it would mean hinging the roof and back wall of the theatre to get the backdrops in or out, which would make the entire cart wobbly and less solid to play with. Secondly, I designed the entire set so that everything it came with could be packed away onto the cart while it is travelling around. A spare backdrop would simply be too big and bulky to fit anywhere on the cart. So sadly, the idea had to be dropped.

That said, it would not be too difficult for anyone owning the set to design their own backdrop - Lego sets are made to be built and re-built, after all.