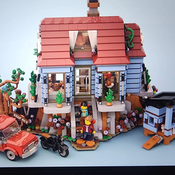 By SpecialK_653
58 comments
I've decided to present two tooth designs and a fossil jaw full of teeth to honor one of the oldest extinct creatures to ever swim in our ancient oceans. The Megalodon shark was a massive predator that hunted the oceans of the world over 20 million years ago and was so large it could theoretically swallow a whale! With all the species of sharks we know of today, I want to bring something "jaw" inspiring to the LEGO table.
I believe this would be a great LEGO set for anyone who loves sharks, the ocean, education of sea life, marine biology and overall experience.
You can hold all three displays in your hands and get the feeling of you're holding the teeth that belonged to one of the ocean's greatest predators!
In this submission, you'll see two Megalodon teeth, one is in fossil stage dark grey and black, and the other is colored as if it just fell out recently. As well as an "Intact" recreation of its massive jaws full of teeth to observe. This project was completed using Studio and contains 1195 pieces.
I hope this project catches some eyes! As always, thank you for your support and comments.
Build on!