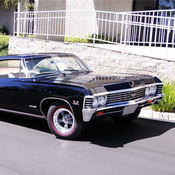 By Chinomax95
40 comments
This is a 1970s Plymouth Superbird.
It was most known for NASCAR, as one of the most dominant cars on the track, Richard Petty drove one.
This one in particular represents a stock Superbird in "Blue Fire" with a 426 Hemi V8.
It has all kinds of details:
- Detailed Engine
- Detailed interior
- Openable Doors
- Openable Hood
- Openable Trunk
Its both a good-looking car and a runner, it has a total of 823 bricks and its 14 bricks wide.
I think it would be a great LEGO set because I haven't seen that much American Classic cars but the Speed Champions Charger, I think an Expert LEGO set would be perfect for this, It's also a very iconic car, and if things go well in the future, I could also build the full out race car Richard Petty drove, it's all up to you reading this.
I've been trying to build one of these ever since I learned to do basic LEGO cars, and its finally here, it really means a lot to me, and its one of my favorite muscle cars.
Any kind of support is very special to me.
Thank you in advance.