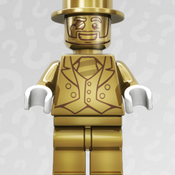 Why I Built It: I thought it would be pretty cool if Equinox and Sports Master, two of my favorite DC Universe villains, became LEGO minifigures.

It Includes: 6 minifigures: Batman, Blue Beetle, Equinox, Farmer, Sports Master, and Truck Driver, 5 vehicles: The Batmobile, the Equi-mobile, the Beetlebike, the Equi-bike, and the Sportsbike, as well as a race track with a black road and four rows of seats.

Why I think It Would Make a Good LEGO Set: You can race the vehicles around the track, and put your own characters in the audience. It gives two more characters from DC new LEGO forms, and provides multiple possibilities.