Great Moments in History: 936-1558 - The Coronation of German Kings at Charlemagne's Throne 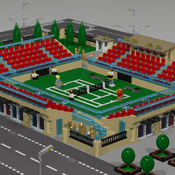 I am really pleased to present you the third project of my "Great Moments in History" series:

Chosen by Charlemagne to be the centre of power of the Carolingian Empire, Aachen (or Aix-la-Chapelle) has since been one of the most important european cities in terms of history. Between 936 (with Otto I) and 1558 (with Ferdinand I, i.e., for more than 600 years), Aachen was the place of Coronation of the German Kings, who would then go to Rome to be crowned Emperors of the Holy Roman Empire. The election of the German King was made by an electoral college, in which 7 prince-electors (the Kurfürsten) participated. The prince-electors were the Archbishops of Mainz, Trier and Cologne, the King of Bohemia, the Count Palatine of the Rhine, the Duke of Saxony and the Margrave of Brandenburg. The ceremony was conducted by the Archbishop of Mainz.

The proposed project consists of a medium-sized vignette with 16x24 studs and 640 pieces (minifigures included). It represents the coronation of the Emperor, surrounded by the 7 prince-electors (whose shields are displayed at the left of the first picture) and 4 guards. The yellow flags with a doubled-headed eagle is the flag of the Holy Roman Emperor, at least since 1430. The second picture shows the Throne of Charlemagne in greater detail. If you browse the internet, you can make a comparison with the real one (I also present a picture of it).

PS - You can find the first two projects of this series:

Great Moments in History: 1776 - The Declaration of Independence of the United States;

Great Moments in History: 1494 - The Signing of the Treaty of Tordesillas

at these links (respectively):