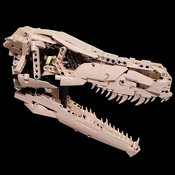 By Damian T
50 comments
Dilophosaurus, its name meaning “double crested lizard” was a carnivorous theropod that lived during the early Jurassic period (approximately 193 million years ago) and inhabited Asia and North America. It is highly recognizable due to the two flat, spreading crests on top of its head. The purpose of the Dilophosaurus’ crests is a matter of some debate, though most researchers agree that they were likely aesthetic in function or used for heat regulation, rather than weapons.
The predator was about 20 feet (6 meters) in length from head to tail, weighed approximately a thousand pounds and stood only about as tall as an adult human.
Its fossils have been found in places such as Telangana (India), Arizona and Yunnan (China). It was first discovered in 1942 in Arizona by Sam Welles. In 1970, he named it Dilophosaurus.
Now you can own a part of your very own Dilophosaurus, a Skull at a scale of 1:1. Be amazed by its size and power and view this “double crested lizard” from any angle on its display stand. This would be the perfect addition to any lego collection. Approximatley built from around 1000 pieces, mainly technic.
The skull is approx 53cm in length and 32cm wide. On the display stand it is 40cm at its widest and 70cm at its highest.
Thanks for taking the time to look at my build and if you like it please support and share it. Thanks again ;]