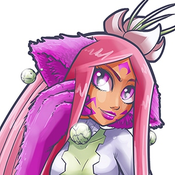 I have been building fully posable micro mecha builds for many years now. I absolutely love everything anime-mecha related from the 1980's all the way ‘till now and most of those bots could transform! So I spent many hours deconstructing some of my earlier models and re-building them... Giving them the ability to turn into flying vehicles!

With designs similar to the space crafts, planes or futuristic helicopters you'd see in a 80's cyberpunk anime cartoon show. These three units along with three nanofigures and the hangar culminate into 429 bricks. The mecha units are fully posable and above all else, can transform without detaching or re-attaching any parts(this was very important to me) with exception to their weapons. The construction of each unit, while similar, has multiple differences. The transformation is fun and simple, yet still clever in its engineering. If released, you could get this set three times in order to have one hangar for each unit. And with all the spare parts, you could create MORE mechas! Just swap out the coloured bricks for different ones.

Older generations of lego fans will love the micro build concept, and many will reflect on all the older shows they enjoyed as a child. Younger audiences will have fun transforming them back and forth, swapping limbs or weapons and putting them in epic poses... Though I imagine many adults would also enjoy this, as I've built them to do all this and I'm 35 years old lol. ;)

There is also potential for expansions you create yourself with bricks at home! If you don't already, then you will start to think outside the box when building these micro mechas. Why not make other bots representing different factions? Or add-on kits giving different types of armors, weapons and tools? And lastly, fun battlegrounds! I would definitely purchase certain Lego Architecture sets and modify them with some battle damage to pose my Units around.

This Project needs 10,000 people to support it, and I'm confident that there are more than enough of us anime-transforming-mecha fans out there that would love to make something like this a reality! Please give this project a little love by Supporting it, and sharing it everywhere possible ;P