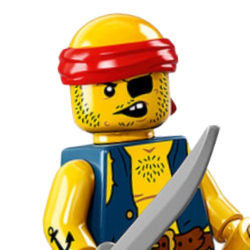 Join the adventure and discover the secrets of the Soldier Imperial Golden Fort. This island has many secrets. Imperial Soldiers are waiting to win with Pirates! Who will first discover the hidden treasury?
My model is an Island of Imperial Guards. Island has a fort and a lot of palm trees, animals and pier with automatic crane for ship. Modules of Fort can be placed on a black base if you like. You can create many combinations. The model includes additional bridge and a small wooden footbridge.
Main features Soldier Imperial Golden Fort:
I built this model because I like theme of Pirates and Imperial Soldiers. I remember when I was a child and my mother bought me the first set with lego pirates. Now I have many pirate sets in my collection - I still colect them and build my creations.
I think this set will be interesting for others. There are many fans of Pirates and Imperial Guards. Adults and their child can build it together. The set is mostly easy to build. Children can easy modify it by moving modules parts and arranging them. It's fun for everyone. Meany adults fan and children loves pirates!
In addition, it looks beautiful on the shelf.
I hope you like this model very much.
78
244
days left