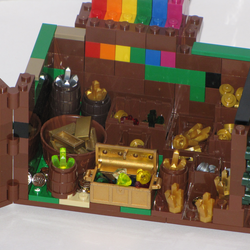 "From days long ago.  From uncharted regions of the universe, comes a legend.  The legend of Voltron, Defender of the Universe.  A mighty robot, loved by good, feared by evil.  As Voltron's legend grew.."
Anyone who loves this cartoon from the eighties remembers the opening dialogue for

I have planned on building this project for some time now.  I finally had enough pieces to try, so I did.  I used pictures of toys online for the patterns and color placement.  This project includes all five lions and the pilots of Voltron Force from the 1980's cartoon.

I have included all of the pilots: Keith, Aurora, Pidge, Hunk, and Lance including the original Blue Lion pilot Sven.

The red and green lions are the arms.  The heads are removable to fly off to defeat the evil Robeasts.  I tried to remain true to how his arms would move by adding the articulation points at the elbows, shoulders, and wrists.

The yellow and blue lions form the legs.  The heads of the blue and yellow lions can form the feet as well as be moved to be lion heads.

The black lion forms the torso and the head.  I have used flat modeling to make his face.

The heads all open and close for pretend roaring. The Lions can be played with separately or together as the big robot.  This project stands over 18 inches tall!!

I hope that all of the fans from the eighties will support this project so we can all play with a Lego Voltron Defender of the Universe.