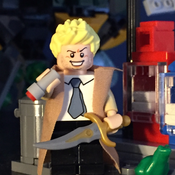 Prepare to skip the light fantastic with Marvel's FIrst Family and their Fantasticar!  Explore the unknown alongside the Fantastic Four: Mr. Fantastic, the Invisible Woman, the Human Torch, and the ever-lovin' blue-eyed Thing.  Joining them on their adventures are Mr. Fantastic and Invisible Woman's wonderful children, Franklin and Val and their robot pal, H.E.R.B.I.E.  Hop aboard the Fantasticar and see what's out there.