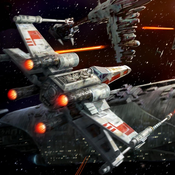 The Mothership was built in the years following the discovery of Khar-Toba, the first colony founded by the Kushan in the wake of their Exile from the world of Hiigara by the Taiidan Empire. Khar-Toba was a significant discovery, proving the existence of spaceships on Kharak's surface in prehistoric times (the existence of ships in the system had already been discovered in the form of debris fields). Further more, the Khar-Toba also contained within it a hyperspace core and other technological wonders, which allowed the Kushan to leap forward several centuries in scientific development, and the Guidestone, which provided the Kushan with the final proof that they were not natives to their world.

The Mothership was envisioned to use the map found on the Guidestone as a star chart, finding its way across the galaxy to the primordial home of the Kushan people. The intention was to colonize the world and to establish a permanent settlement there, so the Mothership was not only designed to serve as an exploratory vessel, but as a colony ship. It would be capable of carrying as many as 600,000 cryogenically frozen Kushan in storage as well as a large crew of 50,000 to maintain the Cryo Trays and man the ship's various systems, including ship construction and mineral refinement, designed to supply the crew and to build or repair ships in case the Mothership Fleet was damaged.

Several asteroid fields had to be cleared in order for the Mothership to be constructed, and their resources were towed to the Scaffold's refineries. There, processed by the Phased Disassembler Arrays and broken down into their base atomic substances, Kharak's debris fields became part of the pride and joy of the Kushan people. From these shattered remains, strong metal alloys were made to build the Mothership's hull. The design went through at least two stages before the Mothership was completed, but the basic idea held and the design was never changed significantly. One large hangar was built in the centre of the ship, accessible by two sides. Although its main purpose was to hold the Cryo Trays and hyperspace core, the hangar was also designed for the construction of ships from Strike Craft to Capital Ship class.